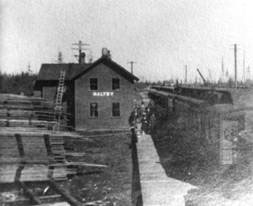 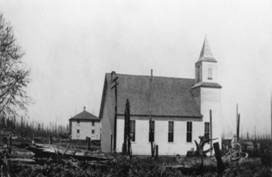 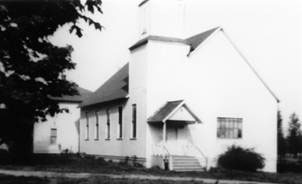 The First Congregational Church of Maltby was organized in 1903, when the town was sixteen years old. The town location had been selected by a railroad company who called it Earl. Next it became Yew, and then, Maltby. The settlers, a majority of whom were attracted by the timber industry, were of diverse ethnic and religious backgrounds.

Congregational Church missionaries from the district office in Seattle periodically visited the evolving communities to offer guidance and financial assistance in starting and operating a church. The Congregational premise of a church operated by consensus of the people, rather than a pastor and board, was appealing for such a diverse group. The group still had a board to provide legal structure and care for routine matters and a pastor to serve as a spiritual guide and teacher, but neither could initiate or take action unless it had been authorized by the congregation. Uniquely, due to a teenage founder, the age of membership was established at 16. Attempts to alter or remove this tenet have met with rejection.

Two of the church founders, Ole H. and Sena Lee had arrived in 1888, to make a living amid the logging slash. Their energy and leadership provided many of the services necessary for a civilized community, such as post office, roads, school district, Sunday School, voter precinct, and finally, a church. They donated lots for the church building and parsonage. For building purposes, timber from Lee property was planed and dried at the mill of Albert V. and Carrie Gray.

The Grays owned the only store and sawmill in town. Additionally, Carrie was one of the founders of the church. Albert V. was retained to construct the building, which was located parallel with Maltby Road. By March of 1905, the church secretary Marie Lee recorded a church board meeting in the new building and indicated her father, Ole reported that all construction bills were paid. Carrie Gray provided music during the worship service on an organ she donated.

Lillian Gray had come from England to visit the family of her brother, Albert. She was not keen about Maltby and stayed in Seattle. However, she was interested in realtor Robert Maltby and became his wife. Robert had lived at Maltby a short time before he received the title to his property and began to sell parcels of it. He moved to Seattle, opened a real estate office and renters lived in his Maltby house.

Over the next 40 years, the town and church were affected by unstable economic conditions. The church sometimes closed for a year or so until the group could get enough money for a part-time pastor. As timber disappeared, the residents tried to diversify once they got rid of the stumps on their land. This gave rise to poultry, produce and berry fields. The only major change for the church occurred during the National Depression.

Typical of stressful times, church attendance improved dramatically at Maltby. The Congregational Church was still the only house of worship in the area and it was overrun with children and teenagers. In 1934, the building was moved across the lot to its current position. It was next to the parsonage and both buildings were utilized for classrooms and meetings.  The pastor during this time, Rev. John Matthews of Seattle, had the longest tenure of anyone to that time, eight and a half years. Then economic recovery took place and attendance waned.

A retired Methodist pastor Rev. Harold Vann moved to a house near the church.  He became the pastor because he could not bear to see the church closed. His gentle presence provided stability for the congregation and kept the church going although the numbers were few. His presence in the community and meaningful sermons slowly brought in more worshipers. He served the church for 25 years and passed away shortly after retirement in 1966.

For over four years, the group had considered a proposal for merger with the United Brethren Church. They chose to remain independent rather than become a part of the United Church of Christ formed in 1968. They opposed the presbytery form of government and the lack of Congregational in the name of the church. Since then, they have been in contact with other independent churches within Washington State to share, exchange and fellowship and also, participate in a national organization.

Several building projects have been necessary during the ensuing years. A second parsonage was constructed in 1972. An extension was added to the south end of the church building in 1978-9. The building was raised in 1992 and a full basement was put beneath it. The original parsonage had to be removed to make room for a ramp to the basement as was required by an earlier building permit. Refurbishment of the sanctuary took place in preparation for the Centennial.

Today the church continues to function much as it did in 1903. The members are of diverse ethnic and religious backgrounds and are a blend from many communities. After Christ who is the head, the congregation still directs the church. Members gather to worship God, use the Bible as their guide, pray together, grow spiritually, study the Bible, serve community needs and the needy and encourage and uplift one another. If you are seeking, come and worship with us.

Church historian Elsie Mann has prepared a Centennial history and also maintains a photo archive. Many of these photos are displayed in the church building.  She is always glad to answer questions and share whatever she knows about your family and Maltby.